A woman’s egg cells are stored in the ovaries. Each month a mature egg cell leaves one of the ovaries. This is called ovulation.

The fallopian tube transports the egg cell to the uterus. The woman’s uterus prepares for pregnancy: the mucous membrane in the uterus grows to receive a fertilized egg cell. The membrane serves as a nest for the egg cell (implantation).

If the egg cell is not fertilized, the woman is not pregnant. The mucous membrane and blood come out of the uterus. They will leave the body through the vagina. This is called a menstrual period.

The menstrual period lasts about 3 to 7 days. The length is different for each woman.

At the start of the menstrual period the mucous membrane starts to grow again and a new cycle starts.

A woman can use tampons or sanitary towels to absorb the blood from her menstrual period. She can also collect the blood with a menstrual cup.

Woman standing. The focus is on the internal sexual organs.
Read aloud Listen

Woman standing. The focus is on the internal sexual organs.
1. The egg cells are stored in the ovaries.
Read aloud Listen 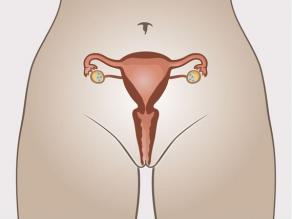 1. The egg cells are stored in the ovaries.
2. Ovulation: a mature egg cell leaves the ovary.
Read aloud Listen 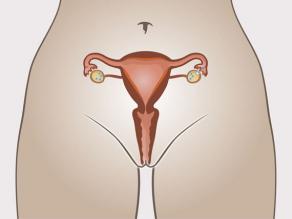 2. Ovulation: a mature egg cell leaves the ovary.
3. The fallopian tube transports the egg cell to the uterus. The mucous membrane in the uterus thickens.
Read aloud Listen 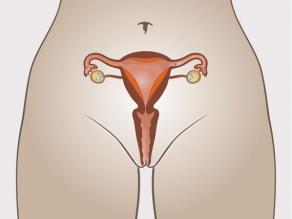 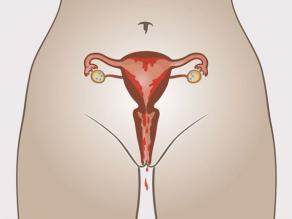 A woman becomes fertile during puberty, in general between the ages of 11 and 15. From that moment she can have children. A girl is fertile from her first ovulation and can therefore get pregnant before her first menstrual period. If the egg cell is not fertilized, she menstruates for the first time. Even when she has sex for the first time, she can get pregnant.

A woman stops having menstrual periods between the ages of 45 and 55. The exact age is different for every woman. This is called the menopause. The woman can no longer get pregnant after that.

At the beginning of the menopause the menstrual periods are irregular. After some time they stop altogether. The menopause can last from a couple of months to several years.

The menopause changes the production of female hormones. Some women might experience discomfort. For example: hot flushes, mood swings, insomnia, loss of concentration, headache and fatigue.

Some methods of contraception prevent the mucous membrane from growing in the uterus or prevent an egg cell from ripening (ovulation). In that case, the woman does not bleed, or only bleeds a little.

A woman can get pregnant during her menstrual period if she is in her fertile days and had unprotected sex. If you do not have a desire to have children at the moment, use contraception.